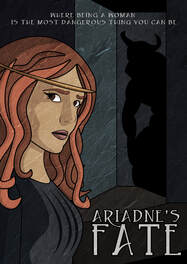 GRAPHIC NOVEL |  Currently in Production
Sci-fi-thriller set in a future society which has been decimated by war and rising sea levels, a world in which women have become extremely scarce. So scarce in fact, that being a woman becomes the most dangerous thing you can be.

Screenwriter Geraldine Martin had this project selected as one of ten for ScreenACT's Low Budget Feature Initiative, where the story was developed. Director Marisa Martin received an artsACT grant to turn the script into a graphic novel utilising her illustration skills.